PASADENA SYMPHONY KICKS OFF 2022-23 SEASON WITH MOZART, SAINT-SAËNS AND A MESSAGE TO HUMANITY

Pasadena, CA – The Pasadena Symphony opens its 95th season with Mozart & Saint-Saëns on Saturday, October 22, 2022 at Ambassador Auditorium with both matinee and evening performances at 2:00pm and 8:00pm. Internationally recognized for his energetic presence, imaginative programming and compelling musicianship, conductor Vinay Parameswaran will kick off the 2022-23 Symphony series as one of six Artistic Partners to take the podium this season as part of the orchestra’s Music Director search.

“The conductors we have selected as Artistic Partners during our search for a new Music Director have curated each concert for you to enjoy what the Pasadena Symphony is known for – the diversity of high art and entertainment that is accessible to all,” says CEO Lora Unger adding “we strive to create a socially vibrant concert-going experience where people feel invited, uplifted, and most importantly, where people feel joy.”

To open the program, the Symphony ushers in their third annual Composer’s Showcase, featuring work by emerging and established living composers with Nokuthula Ngwenyama’s thought-provoking Primal Message, which plays on the idea of humanity’s first message in a bottle hurdled into space 25,000 light years away. Deemed as “one of the biggest pianistic talents to have emerged in this country in the last 25 years” (Baltimore Sun), the Pasadena Symphony is excited to welcome back Terrence Wilson for Saint-Saëns’ widely popular Piano Concerto No. 2. The evening caps off with Rossini’s Overture to La Scala di Seta and finally, Mozart’s tempestuous Symphony No. 39.

The Pasadena Public Health Department recommends all guests either be fully vaccinated or obtain a negative COVID-19 test prior to entry to Ambassador Auditorium, but it is not required. Masks are strongly recommended but are not required. As conditions in the community evolve, the Pasadena Symphony reserves the right to update policies with a focus on public safety. For the most up to date venue safety protocols, visit pasadenasymphony-pops.org/symphony-covid-safety/.

The Pasadena Symphony provides a vibrant experience specially designed for the music lover, the social butterfly or a date night out and the inner epicurean in us all. Celebrate opening night in style in the luxurious Symphony Lounge, yet another addition to the delightful and elegant concert experience the Pasadena Symphony has to offer. A posh setting along Ambassador Auditorium’s beautiful outdoor plaza, patrons enjoy uniquely prepared menus for both lunch and dinner, fine wines from The Michero Family, plus music before the concert and during intermission.

All concerts are held at Ambassador Auditorium, 131 South St. John Ave, Pasadena, CA. Subscription packages start at as low as $99, with single tickets starting at $40. Both may be purchased online at www.pasadenasymphony-pops.org or by calling (626) 793-7172. 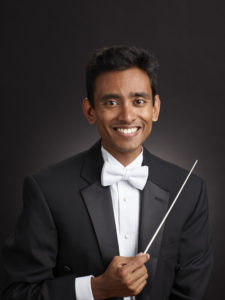 In the summer of 2017, Parameswaran was a Conducting Fellow at the Tanglewood Music Center. He has participated in conducting masterclasses with David Zinman at the National Arts Centre Orchestra in Ottawa, as well as with Marin Alsop and Gustav Meier at the Cabrillo Festival of Contemporary Music.

Equally at home in both symphonic and operatic repertoire, Parameswaran has led performances of Mozart’s The Magic Flute and Donizetti’s The Elixir of Love with Curtis Opera Theater.  In Cleveland, he has assisted Franz Welser-Möst on productions of Janacek’s The Cunning Little Vixen, Wagner’s Tristan und Isolde and Strauss’ Ariadne auf Naxos. Parameswaran is the conductor on the album Two x Four featuring the Curtis 20/21 ensemble alongside violinists Jaime Laredo and Jennifer Koh, featuring works by Bach, David Ludwig, Philip Glass, and Anna Clyne.

A native of the San Francisco Bay Area, Parameswaran holds a Bachelor of Arts degree in music and political science from Brown University, where he graduated with honors.  At Brown, he began his conducting studies with Paul Phillips.  He received an Artist Diploma in conducting from the Curtis Institute of Music, where he studied with renowned pedagogue Otto-Werner Mueller as the Albert M. Greenfield Fellow.

Acclaimed by the Baltimore Sun as “one of the biggest pianistic talents to have emerged in this country in the last 25 years” pianist Terrence Wilson has appeared as soloist with the symphony orchestras of Atlanta, Baltimore, Cincinnati, Dallas, Detroit, Houston, Washington, DC (National Symphony), San Francisco, St. Louis, and with the orchestras of Cleveland, Minnesota, and Philadelphia and the Saint Paul Chamber Orchestra. Conductors with whom he has worked include Christoph Eschenbach, Alan Gilbert, Neeme Järvi, Jesús López-Cobos, Lawrence Renes, Robert Spano, Yuri Temirkanov, Stanislaw Skrowaczewski and Gunther Herbig.

Abroad, Terrence Wilson has played concerti with such ensembles as the Lausanne Chamber Orchestra in Switzerland, the Malaysian Philharmonic, the Royal Scottish National Orchestra, and the Orquestra Sinfonica do Estado de Minas Gerais in Belo Horizonte, Brazil. He has toured with orchestras in the US and abroad, including a tour of the US with the Sofia Festival Orchestra (Bulgaria) and in Europe with the Baltimore Symphony Orchestra conducted by Yuri Temirkanov.

An active recitalist, Terrence Wilson made his New York City recital debut at the 92nd Street Y, and his Washington, DC recital debut at the Kennedy Center. In Europe he has given recitals at the Verbier Festival in Switzerland, the Lourvre in Paris, and countless other major venues. In the US he has given recitals at Lincoln Center in New York City (both Alice Tully Hall and Avery Fisher Hall), the Ravinia Festival in Chicago, the Caramoor Festival in Katonah, NY, San Francisco’s Herbst Theatre, and for the La Jolla Chamber Music Society. An avid chamber musician, he performs regularly with the Ritz Chamber Players. Festival appearances include the Blossom Festival, Tanglewood, Wolf Trap, with the San Francisco Symphony at Stern Grove Park, and an appearance with the Grant Park Symphony Orchestra on July 4, 2015 before an audience of over fifteen thousand.

In the 2018-2019 season, Wilson returns as guest soloist with the Omaha Symphony, gives his debut performance with the Hilton Head Symphony, and performs recitals of the complete sets of Rachmaninoff’s Études Tableaux Op. 33 and Op. 39 in advance of a recording of both sets. He will also appear with the Chamber Music Society of Central Virginia.

Also on the horizon for the coming seasons is the commission, premiere performance and recording of a new solo piano work by American composer Michael Daugherty.

Terrence Wilson has received numerous awards and prizes, including the SONY ES Award for Musical Excellence, an Avery Fisher Career Grant, and the Juilliard Petschek Award. He has also been featured on several radio and television broadcasts, including NPR’s “Performance Today,” WQXR radio in New York, and programs on the BRAVO Network, the Arts & Entertainment Network, public television, and as a guest on late night network television. In 2011, Wilson was nominated for a Grammy in the category of “Best Instrumental Soloist With an Orchestra” for his (world premiere) recording with the Nashville Symphony conducted by Giancarlo Guerrero of Michael Daugherty’s Deus ex Machina for piano and orchestra – written for Wilson in 2007.

Terrence Wilson is a graduate of The Juilliard School, where he studied with Yoheved Kaplinsky. He has also enjoyed the invaluable mentorship of the Romanian pianist and teacher Zitta Zohar. A native of the Bronx, he resides in Montclair, New Jersey. 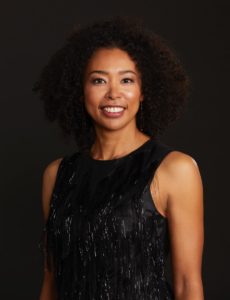 As a performer, Ms. Ngwenyama gained international prominence winning the Primrose International Viola Competition at 16.  The following year she won the Young Concert Artists International Auditions, which led to debuts at the Kennedy Center and the 92nd Street ‘Y.’  A recipient of the prestigious Avery Fisher Career Grant, she has performed with orchestras and as recitalist the world over.

Ms. Ngwenyama has performed at the White House and testified before Congress on behalf of the National Endowment for the Arts (NEA).  An avid educator, she served as visiting professor at the University of Notre Dame and Indiana University Jacobs School of Music.  She also served as director of the Primrose International Viola Competition and is past president of the American Viola Society.  She curates Composer’s Choice, a co-production of ASU/Kerr Cultural Center, Phoenix Chamber Music Society, and Peace Mama Productions (PMP).  It features 21st century music and its creators – from the concert hall to television, game and beyond – in a chamber setting.

Born in Los Angeles, California of Zimbabwean-Japanese parentage, Nokuthula Endo Ngwenyama  (No-goo-TOO-lah En-doh En-gwen-YAH-mah) studied theory and counterpoint with Mary Ann Cummins, Warren Spaeth and Dr. Herbert Zipper at the Crossroads School for Arts and Sciences.  She also appeared on Sylvia Kunin’s Emmy-nominated ‘A Musical Encounter’ series with host Lynn Harrell and was an orchestral soloist in the American Film Foundation documentary Never Give Up: The 20th Century Odyssey of Herbert Zipper.  She is an alumna of the Colburn School for the Performing Arts (now the Colburn Community School of Performing Arts) and the Curtis Institute of Music, where her theory and counterpoint teachers were Edward Aldwell, Jennifer Higdon and David Loeb.  As a Fulbright Scholar she attended the Conservatoire National Supérieur de Musique et de Danse de Paris and received a Master of Theological Studies degree from Harvard University.  She is the first composer in residence of the Phoenix Chamber Music Society and plays on a 1597 Antonius and Hieronymus Amati viola from the Biggs Collection.