Pasadena, CA – The Pasadena Symphony’s annual Holiday Candlelight concert returns to All Saints Church on Saturday, December 17, 2022 with two performances at 4:00pm & 7:00pm. Pasadena’s most sought-after event of the season has become a cherished community holiday tradition and sells out quickly. The architecturally exquisite and acoustically sonorous All Saints Church, Pasadena’s equivalent of a European cathedral, provides the perfect setting to immerse yourself in a Holiday wonderland among an array of hand bells and choruses, with Pasadena’s premiere orchestra.

A Disney regular, Powell’s voice has appeared on both Frozen films, Mulan and Lady and the Tramp, as well as on Michael Bublé’s Nobody But Me album among many others.

Fully-reserved seating is available to purchase throughout the lavish All Saints Church, specially fitted with festive floral and decorations, all under the glow of candlelight. Tickets to Holiday Candlelight are limited and will sell out. Tickets start at $25 and may be purchased either at pasadenasymphony-pops.org or by calling the box office at 626.793.7172.

The Pasadena Public Health Department recommends all guests either be fully vaccinated or obtain a negative COVID-19 test prior to entry to All Saints Church, but it is not required. Masks are strongly recommended but not required. As conditions in the community evolve, the Pasadena Symphony reserves the right to update policies with a focus on public safety. For the most up to date venue safety protocols, https://pasadenasymphony-pops.org/symphony-covid-safety/.

Larry Blank is one of the most prolific and sought-after composers, conductors, and orchestrators in the entertainment business today. His work has been presented all over the world, including some of Broadway’s most successful musicals, Carnegie Hall, and top television and film projects.

He was the Music Director/Conductor and/or vocal arranger for many shows on Broadway and in Los Angeles including They’re Playing Our Song, Evita, Sugar Babies, La Cage Aux Folles, Phantom Of The Opera, Onward Victoria, Copperfield, Colette, A Chorus Line and A Little Night Music. He has been nominated three times for both the Tony Award and the Drama Desk Award for his orchestrations in The Drowsy Chaperone, Irving Berlin’s White Christmas and with Marc Shaiman for Catch Me If You Can. Larry received a Drama Desk Nomination for orchestrations for A Christmas Story and Honeymoon in Vegas.

Blank’s background includes orchestrating and arranging songs for South Park and was Music Supervisor and Orchestrator for Jerry Herman’s movie, Mrs. Santa Claus starring Angela Lansbury and Charles Durning. Some of the films he lent his talent to include The Kid, Kiss The Girls, The American President, Forget Paris, City Slickers II, The Net, That¹s Entertainment III, North, I¹d Do Anything, and Stuart Saves His Family. Blank’s music can be heard on the animated feature films, Cats Don’t Dance and All Dogs Go To Heaven as well as the 101 Dalmatians Christmas Special.

Multi-Grammy® and Emmy® winning music creative LC Powell (formerly Laura Dickinson) is best known for their voice acting work for Riot Games (League of Legends) and extensive work for Disney, with selected credits including four seasons of Phineas and Ferb and Sofia the First, both Frozen films, Elena of Avalor, The Little Mermaid Live, Phineas and Ferb: Candace Against The Universe, Ralph Breaks the Internet, Lady and the Tramp (2019) and Mulan (2020).

Trent Reznor and Atticus Ross’ “The Way It Used to Be” for Watchmen (HBO) featuring Mx. Powell’s principal vocal work received critical acclaim and was nominated for a 2020 Emmy® award.  “Something In The Air” from Elena of Avalor featuring a vocal ensemble that LC contracted and directed was nominated for a 2021 Daytime Emmy® award.  Other recent selected credits include Disenchanted, Perry Mason, Paul McCartney’s Egypt Station, Christmas on the Square with Dolly Parton, The Orville, Marvel’s WandaVision & Dr. Strange in the Multiverse of Madness, Cherry, Q: Into The Storm, The Morning Show, Esther Povitsky’s Hot For My Name, Summer Camp Island, Close Enough, Perfect Harmony, American Horror Story, Disenchantment, Justin Timberlake and Chris Stapleton’s Say Something video, and The Secret Life of Pets 2.

LC is a long-time member of the American Society of Music Arrangers and Composers, joining their Board of Directors in 2019 (ASMAC.org) and is passionate about NARAS’ #GiveCredit initiative.  LC has also served as one of Michael Bublé’s music contractors and his support vocal director/arranger since 2015.  LC was grateful to open for Tony Bennett, Bob Newhart, and Lyle Lovett.  Previous principal soloist work with Latin American Jazz Orchestra, Owensboro Symphony, Santa Rosa Symphony, New West Symphony, United Nations Ambassador Ricky Kej, and Salt Lake City Jazz Orchestra has brought great musical joy, in addition to an 18-year relationship with Laguna Beach’s Festival of the Arts / Pageant of the Masters as Principal Vocalist, Vocal Contractor / Supervisor, Recording Engineer, and Music Synchronist.

Mx. Powell is currently working as lead composer on an upcoming animated television series and independent short film, in addition to multiple projects in development as a writer. 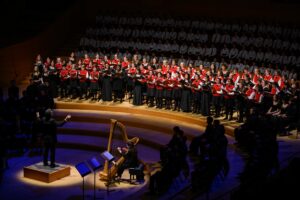 GRAMMY Award-winning Los Angeles Children’s Chorus (LACC), one of the world’s preeminent youth choruses, has been lauded as “hauntingly beautiful” (Los Angeles Times), “the best children’s chorus I have ever heard” (Esa-Pekka Salonen), and “one of the true artistic gems of Los Angeles” (Gustavo Dudamel).

Founded in 1986 and led now by Artistic Director Fernando Malvar-Ruiz, LACC annually appears in more than 50 public performances, including in its own self-produced concerts and in collaborations with leading organizations such as LA Opera, Los Angeles Philharmonic, Los Angeles Master Chorale, Los Angeles Chamber Orchestra, and Pasadena Symphony and POPS.

The Chorus is featured in alumna Billie Eilish’s 2021 cinematic concert experience Happier Than Ever: A Love Letter To Los Angeles on Disney+, and has appeared on John Williams’ 2017 recording, John Williams & Steven Spielberg: The Ultimate Collection, and the Los Angeles Master Chorale’s critically-acclaimed Decca recording, A Good Understanding. The subject of four documentaries by Academy Award®-winning filmmaker Freida Mock, LACC is featured in the Academy Award®-nominated Sing!, about a year in the life of the choir. LACC has performed with John Mayer on NBC’s “The Tonight Show” and been featured on PBS’s “Great Performances,” BBC Radio, and PRI’s nationally-syndicated show “From the Top.”

Winner of the 2022 GRAMMY Award for Best Choral Performance for its performance on the LA Philharmonic’s 2021 album, Mahler Symphony No. 8, and recipient of Chorus America’s Margaret Hillis Award for Choral Excellence, LACC frequently serves as a cultural ambassador for Los Angeles on tours that have taken the Chorus to 20+ countries on 6 continents. For more information, please visit www.lachildrenschorus.org.

Donald Brinegar is a conductor, tenor soloist, voice instructor, educator and master class clinician. Professor Emeritus of Music at Pasadena City College, Brinegar directed the Choral Studies program at PCC for  36 years. Brinegar also conducts the Donald Brinegar Singers, a community choral ensemble in Pasadena, California, Director of Choruses for the Pasadena Symphony and POPS, . During the summers he co-directs the Cal State Los Angeles masters program in choral conducting. He has an extensive background as a performer both as a soloist and a conductor having performed throughout the United States,Japan, Europe, Australia, New Zealand, Mexico, and Canada. Brinegar has performed as a featured soloist with Robert Shaw, Helmuth Rilling, Roger Wagner,Gerard Swartz, Murray Sidlin, Howard Swan, Charles Hirt, Rod Eichenberger, William Hall, Marvin Hamlisch, Michael Feinstein, and with numerous music festivals, orchestras and opera associations. He has collaborated artistically with Henry Mancini, Barry Manilow, The Los Angeles Philharmonic, John Delancie, and the Chieftains. His choirs have given five performances for the American Choral Directors Association Conferences, California Music Educators (MENC), Choral Conductors Guild, and have performed in Carnegie Hall, the Los Angeles Music Center, and the Hollywood Bowl.

The Donald Brinegar Singers, choral ensemble, was founded in the Fall of 1997 as an ensemble of former students and colleagues of Professor Brinegar. Their first concert was given in November of 1997. Their second performance was the premiere of Lauridsen’s organ edition of Lux Aeterna, accompanied by organist James Buonemani. The ensemble presented music of the holiday season and was then invited to perform at The ACDA Western Division Convention in Los Angeles, 2000. Shortly following the convention appearance, the Singers recorded Ubi caritas et amor and Madrigali Six FireSongs: for Lauridsen’s compact disc, Northwest Journey. The Singers performed the Chansons des Roses with Lauridsen accompanying at the San Antonio, Texas, ACDA National Conference. The Singers followed with two more performances of Lauridsen’s music in Las Vegas, 2004 ACDA Western Division Conference, and the premiere of Nocturnes (The Brock Memorial Convention Commission) 2005, Los Angeles ACDA National Convention.

The Singers are the resident chorus for the Pasadena Symphony and POPS, having sung for David Lockington, Grant Cooper, Marvin Hamlisch, Larry Blank, and Michael Feinstein. In 2015, the ensemble performed the orchestrated version of Lauridsen’s Mid- Winter Songs along with the Nocturnes (Lauridsen accompanying) with the symphony. The ensemble has also performed at the Dorothy Chandler Pavilion, Walt Disney Concert Hall, the Hollywood Bowl, the Los Angeles Arboretum, and for Brinegar’s publisher, Santa Barbara Music Publishing, Santa Barbara. The Singers have given premiere performances of the music of Bruce Babcock, David Childs, Emma Lou Diemer, Morten Lauridsen, Z. Randall Stroope, and Eric Whitacre, among many others. The Singers recorded the background score for the film, The Bridge to Terrabithia, music by Aaron Zigman. They are the featured ensemble in an Irish Folk Song Collection, Letters from Ireland by Mark Brymer.

Pasadena is a city rich with the arts and sciences, which gives way for the Jet Propulsion Laboratory Chorus to blend perfectly. Formed early in 2012 in a partnership between the Pasadena Symphony Association and the Jet Propulsion Laboratory, the JPL Chorus is comprised of JPL employees who rehearse weekly under the direction of (Donald Brinegar), the Pasadena Symphony’s Director of Choruses. The JPL Chorus is comprised of 53 employees who rehearse each Wednesday evening. Their concert program includes a mixture of classical repertoire to popular, with composers ranging from Benjamin Britten and John Lennon/Paul McCartney.

The singers come from a wide variety of roles within JPL, including scientists, engineers, administrators, software, business people, and more. “The idea is to celebrate JPL with our group’s enthusiasm about music and singing. It’s been a lot of fun, and I think what Don brings to this particularly is a great sense of joy in the experience,” stated Stephen Kulczycki, Deputy Director of Communication and Education at JPL (and a member of the bass section.)

Under the artistic direction of Alex Guebert, LA Bronze is an auditioned handbell concert choir creating performances of the highest caliber for the community.  Their music making is exciting and uplifting, and audiences around Southern California have praised their concerts.  The group is comprised of accomplished handbell musicians who are seeking challenging opportunities for making music, while providing educational opportunities for the handbell community.  Our members come from all over the L. A. basin and include musicians, educators, administrators and other professionals.