Pasadena, CA – The Pasadena POPS celebrate the best of The Beatles with Classical Mystery Tour on Saturday, August 28 at the Los Angeles County Arboretum. Back by popular demand, Classical Mystery Tour: A Tribute to the Beatles brings the timeless hits of the Fab Four to life with a fresh set list of favorites from the early years to Sgt. Pepper’s through their solo careers.  Spanning The Beatles’ vast catalog, tracks include “Yesterday,” “Here Comes the Sun,” “A Day in the Life,” “While My Guitar Gently Weeps,” “Hey Jude,” “Imagine,” plus many more.

Classical Mystery Tour performers include Jim Owen (John Lennon), Paul Curatolo (Paul McCartney), Joe Bithorn (George Harrison) and Joe Bologna (Ringo Starr). The quartet looks and sounds just like The Beatles, with unforgettable music and costumes, but Classical Mystery Tour is more than just a rock concert. The show presents more than two dozen Beatles tunes transcribed note-for-note and performed with a full orchestra – like you’ve never heard them before. The Los Angeles Times raved that Classical Mystery Tour was “more than just an incredible simulation…the crowd stood and bellowed for more.” You might say it’s the best show the Beatles never did!

“The orchestral score is exact, right down to every note and instrument that was on the original recording,” explains Jim Owen, one of the founders of Classical Mystery Tour. “It’s always been our goal to play Beatles music as close as possible to the way they did it, because really, they did it the best.”

In order to provide the safest possible experience for all concertgoers, entry to all Pasadena POPS concerts will require proof of receiving a fully completed Covid-19 vaccine at least two weeks prior to the concert date. For the most up to date venue safety protocols, visit pasadenasymphony-pops.org/covid-19-safety-protocols-pops.

All concerts are held at the Los Angeles County Arboretum and Botanic Gardens. Grounds open for picnicking and dining at 5:30pm and performances begin at 7:30pm. Don’t miss the best outdoor dinner party in town with spacious circular table seating with fine linens, or lawn seating for those who want to bring a blanket – each option carries on the tradition of picnic-dining with your family and friends listening to the San Gabriel Valley’s premier orchestra! Among many venue amenities, concert goers can enjoy pre-ordered gourmet box dinners for on-site pickup from Claud’s or Julienne, or VIP table service from the Peacock Café, as well as a variety of food truck options and two full-service beverage centers.

The Arboretum is located at 301 North Baldwin Ave., Arcadia, CA. Subscribers may purchase pre-paid onsite parking at the Arboretum, and all concertgoers can purchase guaranteed and convenient parking at Santa Anita Park, with complimentary non-stop shuttle service to the Arboretum’s main entrance.

Single tickets start at $25. Season subscriptions and single tickets are now on sale, and are available by calling the box office at (626)-793-7172, online at PasadenaSymphony-Pops.org or at the Arboretum on concert days.

Resident Pops Conductor, Larry Blank is one of the most prolific and sought after composers, conductors, and orchestrators in the entertainment business today. His work has been presented all over the world, including some of Broadway’s most successful musicals, Carnegie Hall, and top television and film projects.

He was the Music Director/Conductor and/or vocal arranger for many shows on Broadway and in Los Angeles including They’re Playing Our Song, Evita, Sugar Babies, La Cage Aux Folles, Phantom Of The Opera, Onward Victoria, Copperfield, Colette, A Chorus Line and A Little Night Music. He has been nominated three times for both the Tony Award and the Drama Desk Award for his orchestrations in The Drowsy Chaperone, Irving Berlin’s White Christmas and with Marc Shaiman for Catch Me If You Can. Larry received a Drama Desk Nomination for orchestrations for A Christmas Story

Blank’s background includes orchestrating and arranging songs for South Park and was Music Supervisor and Orchestrator for Jerry Herman’s movie, Mrs. Santa Claus starring Angela Lansbury and Charles Durning. Some of the films he lent his talent to include The Kid, Kiss The Girls, The American President, Forget Paris, City Slickers II, The Net, That¹s Entertainment III, North, I¹d Do Anything, and Stuart Saves His Family. Blank’s music can be heard on the animated feature films, Cats Don’t Dance and All Dogs Go To Heaven as well as the 101 Dalmatians Christmas Special.

Since its initial show at the Orange County Performing Arts Center (now renamed the Segerstrom Center for the Arts) in 1996, Classical Mystery Tour has performed with more than 100 orchestras across the United States and around the world, receiving accolades from fans and the media. The Los Angeles Times called the show “more than just an incredible simulation…the swelling strings and soaring French horn lines gave the live performance a high goose-bump quotient…the crowd stood and bellowed for more.”

“We really make an effort to sound exactly like the originals,” explains James Owen, the founder of Classical Mystery Tour who also portrays John Lennon in the show. “The orchestra score is exact, right down to every note and instrument that was on the original recording. On ‘Got to Get You Into My Life,’ we have two tenor saxes and three trumpets. That’s what it was written for, and that’s what we use. And on ‘A Day in the Life,’ that final big orchestra crescendo sounds amazing when it’s played live.”

The release of The Beatles music on ITunes, plus the popularity of The Beatles Box Set and Beatles Rock Band, set off a new wave of Beatlemania and proved that The Beatles are more popular than ever. Because many Beatles fans never had the opportunity to experience a live Beatles show, Classical Mystery Tour offers that live experience—with a symphony orchestra.

“We have some real show-stopping numbers,” says Owen. “I wish I could actually be in the audience to see and hear this show, because the power of the emotional and nostalgic connection this music has with audiences is hard to put into words.” 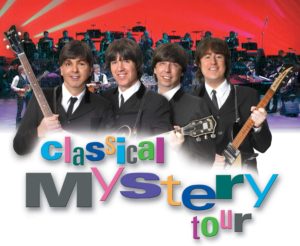 Jim Owen was born and raised in Huntington Beach, California.  He gained rich musical experience from his father, who played music from the classics for him on the piano, and from his extensive library of recordings by the great classical artists. Jim began studying the piano at age six, and won honors in various piano performance competitions throughout his teenage years. He was eight years old when he first heard The Beatles, and promptly decided to take up the study of the guitar.

His first professional performance as a Beatle tribute artist was at 16. Then, at age 18, he began touring internationally with various Beatles tribute productions, visiting Japan, Korea, China, Canada, Mexico, and much of South America.

It has long been Jim’s dream to share with the public live performances of some of the greatest music ever written and recorded, so in 1996, Owen began working on his idea for a new Beatles tribute show with orchestra. Classical Mystery Tour was the result.

At ten years old, his musical journey began when he taught himself the drums. He quickly adapted to guitar and piano, which drove him to write and record his own music. At age 14, he was a member of the pop band “Wayward”, and went on to record five albums. Until recently the band has toured the U.S. and was voted home town heroes in Alternative Press magazine. Paul’s love for the Beatles has driven him to master the character of Paul McCartney down to every detail – from vocal inflections, to turning the bass over to perform left-handed. Paul considers it an honor to pay tribute to his idol.

Joe Bithorn grew up in Manhattan and Long Island where he was exposed to a variety of music including jazz, Latin, classical and more. By age 3, his musical father taught the children how to sing harmony.  He was profoundly influenced by the experiences he had at Carnegie Hall through his Mom who worked with the Festival Casals. Thanks to The Beatles appearance on Ed Sullivan, Joe took a strong interest in the guitar. Early influences include the band Cream, and Joe developed the ability to learn guitar parts by ear by age 14. By age 16, Joe was so proficient that he was recruited for studio sessions.  While in high school, Joe and his brother formed The Bithorn Brothers Band, performing the early music of the Allman Brothers Band. Joe heard about an audition for Beatlemania, and was hired for the touring production as George. After touring with the show in North America, Joe joined RAIN in 1983 and has been touring the world ever since.