Pasadena, CA – The Pasadena Symphony’s annual Holiday Candlelight concert returns to All Saints Church on Saturday, December 14, 2019. Having sold out for the past eight years, the symphony offers two performances to meet community demand at 4:00pm & 7:00pm. The architecturally exquisite and acoustically sonorous All Saints Church, Pasadena’s equivalent of a European cathedral, provides the perfect setting to hear your holiday favorites –  all performed by candlelight. Audiences are going to love each and every moment of this cherished holiday tradition.

Back by popular demand, Pasadena Symphony Music Director David Lockington will conduct an array of choruses including the Los Angeles Children’s Chorus, the Donald Brinegar Singers and the L.A. Bronze Handbell Ensemble, set against the backdrop of the Pasadena Symphony. Special guest Sarah Uriarte Berry will accompany the orchestra as vocalist. With countless Broadway credits under her belt including Belle in Disney’s Beauty and the Beast, Diana in the Tony Award and Pulitzer Prize-winning 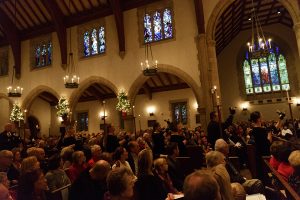 Next To Normal and Les Miserables’ Eponine, Berry is sure to bring an unforgettable performance.

This year’s program has something for everyone to ring in the holiday season, from traditional holiday classics to popular standards. Hear Deck the Halls, Joy to the World, It’s Beginning to Look a Lot Like Christmas, Sleigh Ride, Hallelujah! and many cherished favorites. The venue offers fully assigned individual seating throughout All Saints’ glorious interior, ensuring that the audience can enjoy their experience with ease and have a well-deserved break from the hustle and bustle of the season. Top off your holidays with lasting memories for the whole family at this time-honored tradition.

Tickets to Holiday Candlelight with the Pasadena Symphony are limited and will sell out. Seats start at $20 and may be purchased either at pasadenasymphony-pops.org or by calling the box office at 626.793.7172.

David Lockington began his career as a cellist and was the Principal with the National Youth Orchestra of Great Britain for two years. After completing his Bachelor of Arts degree at the University of Cambridge where he was a choral scholar, Mr. Lockington came to the United States on a scholarship to Yale University where he received his Master’s Degree in cello performance and studied conducting with Otto Werner Mueller. He was a member of the New Haven Symphony Orchestra and served as assistant principal cellist with the Denver Symphony Orchestra for three years before turning to conducting.

Over the past thirty years, David Lockington has developed an impressive conducting career in the United States. A native of Great Britain, he served as the Music Director of the Grand Rapids Symphony from January 1999 to May 2015, and is currently the orchestra’s Conductor Laureate. He has held the position of Music Director with the Modesto Symphony since May 2007 and in March 2013, Mr. Lockington was appointed Music Director of the Pasadena Symphony. He has a close relationship with the Orquesta Sinfonica del Principado de Asturias in Spain, where he was the orchestra’s Principal Guest Conductor from 2012 through 2016, and in the 15/16 season was named one of three Artistic Partners with the Northwest Sinfonietta in Tacoma, Washington.

Mr. Lockington’s guest conducting engagements include appearances with the Saint Louis, Houston, Detroit, Seattle, Toronto, Vancouver, Oregon and Phoenix symphonies; the Rochester and Louisiana Philharmonics; and the Orchestra of St. Luke’s at Carnegie Hall. Internationally, he has conducted the Northern Sinfonia in Great Britain, the Israel Chamber Orchestra, the China Broadcasting Symphony Orchestra in Beijing and Taiwan, and led the English Chamber Orchestra on a tour in Asia.

David Lockington began his career as a cellist and was the Principal with the National Youth Orchestra of Great Britain for two years. After completing his Bachelor of Arts degree at the University of Cambridge where he was a choral scholar, Mr. Lockington came to the United States on a scholarship to Yale University where he received his Master’s Degree in cello performance and studied conducting with Otto Werner Mueller. He was a member of the New Haven Symphony Orchestra and served as assistant principal cellist with the Denver Symphony Orchestra for three years before turning to conducting.

Sarah Uriarte Berry has enjoyed an extensive Broadway career, with several distinguished leading roles under her belt. Ms. Berry created the role of Franca in The Light in the Piazza for Lincoln Center Theater (Drama Desk and Outer Critics Circle nominations.) She appeared as Belle in Disney’s Beauty and the Beast, Eponine in Les Miserables, Nicola in Taboo, Diana in the Tony Award and Pulitzer Prize winning Next To Normal, and in the title role for New York City Opera’s production of Rodgers & Hammerstein’s Cinderella.

Ms. Berry starred in the Royal National Tour of Carousel (Dramalogue Award Best Actress, Ovation nomination), Sunset Boulevard with Petula Clark, and the National Tour of Les Miserables. Regionally, she appeared in A Little Night Music at The Kennedy Center, Terrence McNally’s Master Class and Guys and Dolls, to name a few.

A busy concert artist, Sarah was a soloist at Carnegie Hall with the Baltimore Symphony Orchestra, with the Philadelphia Orchestra, among others. Ms. Berry recently debuted her one woman show, For The Love Of Judy with The Cape Symphony.

Broadway Cast recordings include The Light In The Piazza, Taboo, The Boys from Syracuse, Tenderloin, Bernstein’s Mass and her debut EP, For the Love of Judy. TV and film appearances include Law and Order CSI, Frontera, Pretty Bird, Six Degrees, the Dave Letterman Show, and The Light in the Piazza (PBS). Sarah is a graduate of the UCLA School of Theater, Film and Television.

Under Artistic Director Fernando Malvar-Ruiz, the Los Angeles Children’s Chorus provides choral music education of the highest quality to young people who represent richly diverse racial, economic, and cultural backgrounds. The program ignites a love of singing and nurtures the full expression of each individual’s potential for artistic and personal excellence through the collaborative

experience of choral music performance. Through the beauty of inspired and joyful singing, Los Angeles Children’s Chorus brings the transformative power of music to communities throughout Southern California, the nation and the world. Now in its 29th season—2014|2015: “Celebrating American Song…California and Beyond”—LACC serves more than 400 young singers from more than 50 communities throughout greater Los Angeles, reflecting in its membership the cultural and economic diversity of the region.

Donald Brinegar is a conductor, tenor soloist, voice instructor, educator and master class clinician. Professor Emeritus of Music at Pasadena City College, Brinegar directed the Choral Studies program at PCC for 36 years. Brinegar also conducts the Donald Brinegar Singers, a community choral ensemble in Pasadena, California, and is Director of Choruses for the

Pasadena Symphony and POPS, During the summers he co-directs the Cal State Los Angeles masters program in choral conducting.

Brinegar has an extensive background as both as a soloist and a conductor, having performed throughout the United States, Japan, Europe, Australia, New Zealand, Mexico, and Canada. He has performed as a featured soloist with Robert Shaw, Helmuth Rilling, Roger Wagner, Gerard Swartz, Murray Sidlin, Howard Swan, Charles Hirt, Rod Eichenberger, William Hall, Marvin Hamlisch, Michael Feinstein, and with numerous music festivals, orchestras and opera associations. He has collaborated artistically with Henry Mancini, Barry Manilow, The Los Angeles Philharmonic, John Delancie, and the Chieftains. His choirs have performed for the American Choral Directors Association Conferences, California Music Educators (MENC), Choral Conductors Guild, and at Carnegie Hall, the Los Angeles Music Center, and the Hollywood Bowl.

The Donald Brinegar Singers choral ensemble was founded in the Fall of 1997 as an ensemble of former students and colleagues of Professor Brinegar. The Singers are the resident chorus for the Pasadena Symphony and POPS, having sung for David Lockington, Grant Cooper, Marvin Hamlisch, Larry Blank, and Michael Feinstein. The ensemble has performed at the Dorothy Chandler Pavilion, Walt Disney Concert Hall, the Hollywood Bowl, the Los Angeles Arboretum, among others. The Singers have given premiere performances of the music of Bruce Babcock, David Childs, Emma Lou Diemer, Morten Lauridsen, Z. Randall Stroope, and Eric Whitacre, among many others. The Singers recorded the background score for the film The Bridge to Terabithia, music by Aaron Zigman. They are the featured ensemble in an Irish Folk Song Collection, Letters from Ireland by Mark Brymer.

Under the artistic direction of Alex Guebert, L.A. Bronze is an auditioned handbell concert choir creating performances of the highest caliber for the community.  Their music making is exciting and uplifting, and audiences around Southern California have praised their concerts.  The group is comprised of accomplished handbell musicians who are seeking challenging opportunities for making music, while providing educational opportunities for the handbell community.  Our members come from all over the L. A. basin and include musicians, educators, administrators and other professionals.

A hallmark of its robust education programs, the Pasadena Symphony Association has served the youth of the region for over five decades through the Pasadena Youth Symphony Orchestras (PYSO) comprised of five performing ensembles, with over 250 gifted 4th-12th grade students from more than 50 schools all over the Southern California region.  The PYSO Symphony often performs on the popular television show GLEE.