Pasadena Symphony Association President Diane Rankin and Chief Executive Officer Paul Jan Zdunek today announced the extension of Principal Pops Conductor Michael Feinstein’s contract through 2016. His current contract was for a 1-year term, but fresh off the heels with rave reviews for his conducting debut to capacity crowds on June 1st, the leadership of the Pasadena Symphony Association immediately offered Feinstein a multi-year contract extension. The decision represents a confident commitment to Feinstein and support for his vision for the Pasadena POPS Summer Concert Series at the Los Angeles County Arboretum and Botanic Garden. 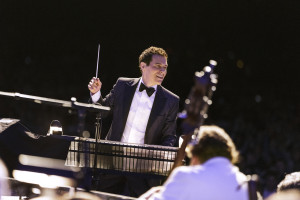 “What Michael brings to us and our audiences is unparalleled in the nation and we are thrilled to support his artistic vision,” says Paul Jan Zdunek, Chief Executive Officer. “Matching the chemistry between our stellar musicians with Michael at the luxuriant Arboretum is an experience no one will forget,” adding “it’s his expert knowledge, humor and joy he brings to preserving the Great American Songbook on the orchestral stage that has endeared him immediately to our musicians and audience.”

Feinstein stated, “The connection I feel to the musicians and making music with them at the beautiful Arboretum is special. I’m delighted that our little experiment of bringing a unique brand of pops programming has been met with such enthusiasm from the audience. We are inspired to build something new here and to share this timeless and extraordinary music with the entire community.”

“We are thrilled with Michael’s decision to remain and grow with the Pasadena POPS,” said Diane Rankin, President of the Pasadena Symphony Association “We are so fortunate to continue our relationship with such an exceptional artist here in Pasadena (and beyond!) and to be able to experience Michael’s uniquely witty, uplifting, and entertaining performances for three more years.”

As the Los Angeles Times declared following Feinstein’s debut as Pasadena’s Principal Pops Conductor, “[W]hat really made this concert a success was Feinstein’s imaginative, searching programming, far beyond the norm for your average so-called pops concert.”

About Michael Feinstein
Michael Feinstein, the multi-platinum-selling, two-time Emmy and five-time Grammy Award-nominated entertainer dubbed “The Ambassador of the Great American Songbook,” is considered one of the premier interpreters of American standards. His 200-plus shows a year have included performances at Carnegie Hall, Sydney Opera House and the Hollywood Bowl as well as the White House and Buckingham Palace.

More than simply a performer, Feinstein has received national recognition for his commitment to celebrating America’s popular song and preserving its legacy for the next generation. In 2007, he founded the Michael Feinstein Great American Songbook Initiative, dedicated to celebrating the art form and preserving it through educational programs, Master Classes, and the annual High School Vocal Academy and Competition, which awards scholarships and prizes to students across the country. Michael serves on the Library of Congress’ National Recording Preservation Board, an organization dedicated to ensuring the survival, conservation and increased public availability of America’s sound recording heritage.

Most recently, in April 2013 Michael released a new CD, Change Of Heart: The Songs of Andre Previn, (Concord) in collaboration with legendary composer-conductor-pianist Andre Previn, with an album celebrating Previn’s repertoire from his catalog of pop songs that have most commonly been featured in motion pictures. The album opens with “(You’ve Had) A Change of Heart.” Previn’s work is highlighted with four Oscars and 11 GRAMMY Awards.

Feinstein’s earned his fifth Grammy Award nomination in 2009 for The Sinatra Project, his Concord Records CD celebrating the music of “Ol’ Blue Eyes.” The Sinatra Project, Volume II: The Good Life was released last year. His Emmy nominated TV special, Michael Feinstein – The Sinatra Legacy, which was taped live at the Palladium in Carmel, IN, is currently airing across the country. Last year’s PBS series “Michael Feinstein’s American Songbook” was the recipient of the ASCAP Deems-Taylor Television Broadcast Award. The series returned in 2013 for a third season, which is now available on DVD. For his nationally syndicated public radio program “Song Travels,” Michael interview and performs alongside of music luminaries such as Bette Midler, Neil Sedaka, Liza Minnelli, Moby, Rickie Lee Jones, David Hyde Pierce and more.

His new book The Gershwins and Me, which is combined with a new CD of Gershwin standards performed with Cyrus Chestnut at the piano, was published by Simon & Schuster in October 2012. Recently, he released the CDs The Power Of Two – collaborating with “Glee” and “30 Rock” star Cheyenne Jackson – and Cheek To Cheek, recorded with Broadway legend Barbara Cook. He recorded We Dreamed These Days, featuring the Carmel Symphony Orchestra; Feinstein co-wrote the title song with Dr. Maya Angelou.

Feinstein serves as Artistic Director of the Palladium Center for the Performing Arts, a $170 million, three-theatre venue in Carmel, Indiana, which opened in January 2011. The theater is home to an annual international Great American Arts festival, diverse live programming and a museum for his rare memorabilia and manuscripts. Starting in 2010, he became the director of the Jazz and Popular Song Series at New York’s Jazz at Lincoln Center.

In 2005, Feinstein recorded Hopeless Romantics, a songbook of Harry Warren classics recorded with legendary jazz pianist George Shearing. The previous year, he completed a national tour with songwriting icon Jimmy Webb based on their album Only One Life – The Songs of Jimmy Webb. The disc was named one of “10 Best CDs of the Year” by USA Today.

In 2003, Feinstein received his fourth Grammy nomination for his release Michael Feinstein with the Israel Philharmonic Orchestra, his first recording with a symphony orchestra. The year before, Rhino/Elektra Music released The Michael Feinstein Anthology, a two-disc compilation spanning the years 1987 to 1996 and featuring old favorites and previously unreleased tracks.

His many other credits include scoring the original music for the film Get Bruce and performing on the hits television series “Better With You,” “Caroline in the City,” “Melrose Place,” “Coach,” “Cybil“ and “7th Heaven.”

The roots of all this work began in Columbus, Ohio, where Feinstein started playing piano by ear as a 5-year-old. After graduating from high school, he worked in local piano bars for two years, moving to Los Angeles when he was 20. The widow of legendary concert pianist-actor Oscar Levant introduced him to Ira Gershwin in July 1977. Feinstein became Gershwin’s assistant for six years, which earned him access to numerous unpublished Gershwin songs, many of which he has since performed and recorded.

Gershwin’s influence provided a solid base upon which Feinstein evolved into a captivating performer, composer and arranger of his own original music. He also has become an unparalleled interpreter of music legends such as Irving Berlin, Jerome Kern, Johnny Mercer, Duke Ellington and Harry Warren. Feinstein has received three honorary doctorates.

Through his live performances, recordings, film and television appearances, and his songwriting (in collaboration with Alan and Marilyn Bergman, Lindy Robbins and Carole Bayer Sager), Feinstein is an all-star force in American music.

About the Pasadena Symphony and POPS
The Pasadena Symphony Association was founded in 1928 by Conductor Reginald Bland. Originally named the Pasadena Civic Orchestra, its first members were mostly volunteer musicians, many of whom were students of Bland. The annual operating budget was $3,500, which was funded entirely by the City of Pasadena.

The Pasadena Symphony provides a musical experience like no other at the Ambassador Auditorium – known as the Carnegie Hall of the West. Internationally recognized, Grammy-nominated conductor David Lockington, serves as the Pasadena Symphony Association’s Music Director with performance-practice specialist Nicholas McGegan serving as Principal Guest Conductor. The Pasadena POPS welcomes the multi-platinum-selling, two-time Emmy and five-time Grammy Award-nominated entertainer dubbed “The Ambassador of the Great American Songbook,” Michael Feinstein as its Principal Pops Conductor, to succeed Marvin Hamlisch in the newly created Marvin Hamlisch Chair. The Pasadena POPS’ summer home is the Los Angeles County Arboretum and Botanic Garden.

A hallmark of its robust education programs, the Pasadena Symphony Association has served the youth of the region since 1972 through the Pasadena Youth Symphony Orchestra and Pasadena Young Musicians Orchestra comprised of over 250 gifted middle school students from more than 50 schools all over the Southland. The PYSO often performs on popular television show GLEE.