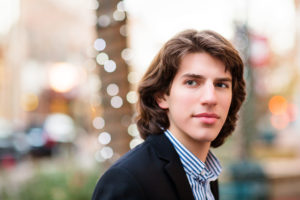 Pasadena, CA –The Pasadena Symphony continues its 2021-22 season with Rhapsody in Blue on Saturday, November 13th at Ambassador Auditorium with both matinee and evening performances at 2:00pm and 8:00pm. Concertgoers will experience the music that defined the American sound with iconic works by Gershwin and Dvořák. The effervescence of Gilmore Young Artist Llewellyn Sanchez-Werner will delight on Gershwin’s Jazz Age masterpiece, and audiences will get lost in one of the most popular symphonies of all time, Dvořák’s Symphony No. 9, “New World”— a tribute to the American spirit.

The Pasadena Symphony’s second annual Composer’s Showcase returns with Nkeiru Okoye’s Voices Shouting Out to open the show. Written as an artistic response to 9/11, Okoye’s piece honors our determined unity as a nation, a voice of affirmation for those fighting for our safety, and a sparkling celebration of life. Artistic Partner Anna Rakitina, Assistant Conductor of the Boston Symphony Orchestra, and only the second female to hold this position, will lead the orchestra for this colorful program exploring the American sound.

In order to provide the safest possible experience for all concertgoers, entry to all Pasadena Symphony concerts will require proof of full Covid-19 vaccination. For a list of accepted forms of proof and the most up to date venue safety protocols, please visit https://pasadenasymphony-pops.org/symphony-covid-safety/

The Pasadena Symphony provides a vibrant experience specially designed for the music lover, the social butterfly or a date night out and the inner epicurean in us all. Make your time at the symphony a special occasion by dining at the outdoor Rusnak Symphony Lounge. A posh setting along Ambassador Auditorium’s beautiful outdoor plaza, patrons enjoy uniquely prepared menus for both lunch and dinner at each concert by Claud & Co, a full bar and fine wines from the Michero Family serving Riboli Family Wines, plus music before the concert and during intermission. In order to provide the safest possible experience, all food must be pre-ordered. For more information, visit: https://bit.ly/symphony-dining.

All concerts are held at Ambassador Auditorium, 131 South St. John Ave, Pasadena, CA. Subscription packages start at as low as $99. Single tickets start at $35 and may be purchased online at www.pasadenasymphony-pops.org or by calling (626) 793-7172.

Recent Acclaim for the Pasadena Symphony and POPS:

“In his five years leading the PSO, Lockington has taken an ensemble that was already quite good and elevated it into one where excellence is the byword.” – Pasadena Star News.

In addition to her responsibilities in Boston, Anna Rakitina was named 2019-20 Dudamel Fellow with the Los Angeles Philharmonic. Under the supervision of the orchestra’s Music and Artistic Director, Gustavo Dudamel, she conducted Los Angeles Philharmonic youth concerts at Walt Disney Concert Hall and developed her craft through involvement in the LA Phil’s orchestral, education and community programs such as Youth Orchestra Los Angeles (YOLA).

In the 2020-21 season Anna Rakitina will make her subscription series debut with the Boston Symphony Orchestra and debut concerts with Baltimore Symphony orchestra, Orchestre de Chambre de Lausanne and Orchestre de Paris amongst others.

In 2019 Anna made her debut with Teatro del Maggio Musicale Fiorentino, the Sinfonieorchester Biel Solothurn in Switzerland, and the Jenaer Philharmonie in Germany. In 2018 she became a fellow in The National Philharmonic Orchestra of Russia. In 2017 she was a guest conductor in Taiwan National Orchestra.

Anna was born in Moscow. She began her musical education as a violin player then has studied conducting at Moscow Tchaikovsky Conservatory in the class of associate professor Stanislav Diachenko (assistant of Prof. Gennadiy Rozhdestvensky). From 2016 to 2018 she studied conducting in Hamburg Hochschule für Musik und Theater (Prof. Ulrich Windfuhr).

During her studies, Anna conducted the following stage performances: “Eugene Onegin” and “Iolanta” by Tchaikovsky, “Aleko” by Rachmaninov,

“The Rape of Lucretia” by Britten and others. Also, Anna wrote PhD thesis work about Rachmaninov.

In 2016 as a participant of Lucerne Academy she took part in the master-class by Alan Gilbert. The year later, 2017, she was Bernard Haitink’s apprentice in his master-class at Lucerne. Also, she participated in master-classes by Gennadiy Rozhdestvensky, Vladimir Jurowski, Johannes Schlaefli. In June 2018 she became a finalist of Workshop with Critical Orchestra in Berlin.

One of Anna’s main achievements is the creation of the chamber orchestra “Affrettando” in conjunction with another conductor Sergey Akimov.

The orchestra became already famous in Moscow as a group of highly professional musicians, which always performs interesting programs.

“Poetic, electrifying,” “mesmerizing artistry and extraordinary ability to communicate,” “masterful technique,” “exquisite lyricism,” “a gifted virtuoso,” have lauded 23-year-old Llewellyn Sanchez-Werner for performances that have stirred the intellect and humanity of his audiences on five continents.

His unique and multi-faceted artistry has been featured on NPR, CNN International, the Wall Street Journal, and WDR-Arte. Named a Gilmore Young Artist, an honor awarded every two years highlighting the most promising American pianists of the new generation, it held deep meaning for him to perform at the White House and Kennedy Center for President Obama’s second Inauguration concert.

General Petraeus commended Mr. Sanchez-Werner’s “courageous humanitarian contributions through the arts…strengthening the ties that unite our nations.” He received the Atlantic Council Young Global Citizen Award recognizing his dedication to social action through music in such countries as Iraq, Rwanda, France, Canada, and the United States. Fellow honorees included Robert De Niro, Presidents Enrique Peña Nieto and Petro Poroshenko, and Prime Ministers Shimon Peres and Lee Kuan Yew. On UN World Day for Cultural Diversity he played with the Iraqi National Symphony in Baghdad, raising funds for the Children’s Cancer Hospital, and in Rwanda, he performed for economic leaders and President Kagame as Rwandans continue rebuilding from the Tutsi genocide. He augmented awareness when he was featured on CNN International. In Paris, he performed at the U.S. Embassy for a special event honoring the visit of the U.S. State Department’s Special Envoy to Muslim Communities, Shaarik Zafar, which was attended by an American delegation and local representatives from various religious groups and civil society advocates.

Renée Fleming, Eric Owens, Marina Poplavskaya, and Cynthia Phelps are among the leading artists Mr. Sanchez-Werner has collaborated with as an active chamber musician. He was Artist-in-Residence at the Canandaigua LakeMusic Festival, Discovery Artist of the New West Symphony, and served as music director for a production of Aida at City College Arts Academy in New York. He partnered with the Gershwin family on a concert and biographical tribute to the Gershwin brothers, and performed “Hallelujah Junction” for John Adams at his 70th birthday celebration in New York. For a Hilan Warshaw WDR-Arte documentary titled “Wagner’s Jews,” which explores the controversy of performing Wagner in Israel and has been aired around the world, Mr. Sanchez-Werner recorded works of Liszt, Wagner, and Tausig.

Since making his concerto debut at age 6, he performs regularly under the batons of such conductors as Mirga Gražinytė-Tyla, Michael Morgan, Karina Cannellakis, Boris Brott, Tito Muñoz, David Lockington, William Noll, Burns Taft, Robert Lawson, and Karim Wasfi. His long relationship with Michael Morgan, with whom he has soloed with 3 orchestras, expanded beyond performing titans of the concerto repertoire when they took on the rarely performed Carlos Chávez piano concerto in a performance that received the Ross McKee Foundation Grant. Mr. Sanchez-Werner’s adventurous programming also took him to perform Glass’ Second Piano Concerto, “After Lewis and Clark,” in 2016 under the baton of Tito Muñoz.

Mr. Sanchez-Werner performed Beethoven, Mozart, and Haydn concerti in partnership with the National Academy Orchestra of Canada and the New West Symphony in 16 concerts for 20,000 North American students to excite more youth about classical music. He continued his work with conductor Boris Brott with performances for an additional 6,000 students as part of an anti-bullying campaign.

A California native, Mr. Sanchez-Werner began his first college degree at 5, and at 6 began performing regularly with orchestras. At Juilliard, he was the youngest admittee to the Bachelor’s Degree at 14 and the Master’s Degree at 18, where he was the recipient of the Kovner Fellowship. While at Juilliard, as the winner of the concerto competition he performed under the baton of Mirga Gražinytė-Tyla. He was also awarded a National Foundation for Advancement in the Arts’ YoungArts gold medal in music. Principal teachers have included Yoheved Kaplinsky, Ilya Itin, Burns Taft, composition with Lowell Liebermann, and improvisation with Noam Sivan. He has extensively studied chamber music with artists including Wu Han, Joseph Kalichstein, Robert McDonald, Robert Levin, and the Brentano, Borromeo, and Shanghai Quartets.

Mr. Sanchez-Werner studies with Boris Berman at the Yale School of Music, where he received the Charles S. Miller Prize at the completion of his first year, in their prestigious Artist Diploma program. 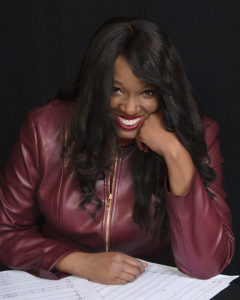 A composer with a gift for incorporating many influences and styles within her work, Nkeiru Okoye is perhaps best known for her opera, Harriet Tubman: When I Crossed that Line to Freedom, the orchestral work, Voices Shouting Out, which she composed as an artistic response to 9/11, and her suite, African Sketches, which has been performed by pianists around the globe. Profiled in both the Music of Black Composers Coloring Book and Routledge’s African American Music: An Introduction textbook, Dr. Okoye is also the inaugural recipient of the Florence Price Award for Composition. A recent New York Times article mentioned, “Okoye’s work would make a fitting grand opening for an opera company’s post-pandemic relaunch.”

In March 2020, the State of Michigan issued a proclamation acknowledging Dr. Okoye’s “extraordinary contributions” to the history of Detroit, Michigan, for Black Bottom, a symphonic experience commissioned by the Detroit Symphony Orchestra, in celebration of the centennial season of Orchestra Hall. Her other recent works include Tales from the Briar Patch, a sung story, commissioned by The American Opera Project, and Charlotte Mecklenburg,  commissioned by the Charlotte Symphony.  Some of her upcoming compositions for the 2021-2022 season include Euba’s Dance, for cellist Matt Haimowitz, When young spring comes for pianist and NPR Host, Laura Downes, and a micro-opera, 600 Square Feet, for Cleveland Opera Theatre.