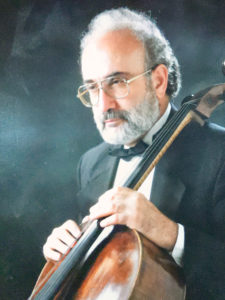 Mr. Hayrikyan is the winner of the First Prize in the Third Transcaucasian Music Competition and Third Prize at the Soviet National Cello Competition. Mr. Hayrikyan has served as principal cellist for the National Symphony Orchestra and the National Chamber Orchestra under world-renowned conductors Khachaturyan, Barshay, Mravinsky and Gergiev.

Since his arrival in the United States, in 1990, Mr. Hayrikyan, in addition to performing many solo recitals, has performed with the Pasadena, Glendale and Burbank Symphonies, the Mozart Camerata and the South Bay Chamber and Hollywood Bowl Orchestras.

Furthermore, he is cellist for the Khachaturyan String Quartet, with which he has performed in renowned venues throughout the country, including Carnegie Hall.

Mr. Hayrikyan also maintains an active studio for private instruction and has been teaching cello for most of his professional career.