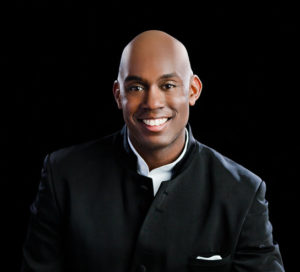 Praised for his suavely adventurous programing, Joseph Young is increasingly recognized as “one of the most gifted conductors of his generation.”  Joseph is Music Director of the Berkeley Symphony, Artistic Director of Ensembles for the Peabody Conservatory, and Resident Conductor of the National Youth Orchestra–USA at Carnegie Hall. In recent years, he has made appearances with the Saint Louis Symphony, Buffalo Philharmonic, Colorado Symphony, Detroit Symphony, Phoenix Symphony, Bamberger Symphoniker,  New World Symphony Orchestra, Spoleto Festival Orchestra, Orquestra Sinfónica do Porto Casa da Música, and  the Orquesta Sinfonica y Coro de RTVE (Madrid); among others in the U.S. and Europe.

In his most recent role Joseph served as the Assistant Conductor of the Atlanta Symphony where he conducted more than 50 concerts per season  Mr. Young also served as the Music Director of the Atlanta Symphony Youth Orchestra, where he was the driving force behind the ensemble’s artistic growth.  Previous appointments have included Resident Conductor of the Phoenix Symphony,  and the League of American Orchestras Conducting Fellow with Buffalo Philharmonic and Baltimore Symphony.

Joseph is a recipient of the 2015 Solti Foundation U.S. Career Assistance Award for young conductors, an award he also won in 2008, and 2014.  In 2013, Joseph was a Semi-finalist in the Gustav Mahler International Conducting Competition (Bamberg, Germany). In 2011, he was one out of six conductors featured in the League of American Orchestras’ prestigious Bruno Walter National Conductor Preview.

Joseph completed graduate studies with Gustav Meier and Markand Thakar at the Peabody Conservatory in 2009, earning an artist’s diploma in conducting.  He has been mentored by many world-renowned conductors including Jorma Panula, Robert Spano and Marin Alsop whom he continues to maintain a close relationship.