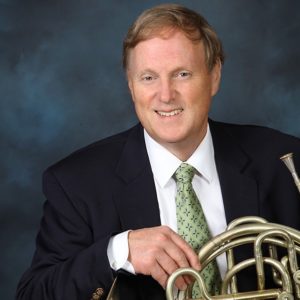 James Thatcher began his professional career at age 16 when he played and studied in Mexico City with his uncle, Gerald Thatcher, former principal hornist with the National Symphony of Mexico. Subsequent instructors have included Fred Fox, Don Peterson, Wendell Hoss, James Decker, Vincent DeRosa and master classes with Hermann Baumann. Mr. Thatcher has been a member of the Phoenix Symphony, the Utah Symphony, the Pacific Symphony and the Los Angeles Philharmonic.

He is currently principal horn of the Pasadena Symphony, the New West Symphony and the Los Angeles Music Center Opera, but principally he is a studio player, a recipient of the Most Valuable Player Award from the National Association of Recording Arts and Sciences and “arguably the most often heard horn player in the world” due to his performances on some 70 to 80 films per year for the last 20 years. James has the enviable position of being the favored first horn of multiple Oscar-winning composer John Williams performing in such films as Always, Jurassic Park, The Lost World, Sleepers (in which he received an on-screen credit), Nixon, Schindler’s List, JFK, Sabrina, Home Alone, Rosewood, Seven Years in Tibet and The Patriot as well as the fanfare for the 1992 Olympics. He also works regularly with other Hollywood greats Jerry Goldsmith, James Newton Howard, Randy Newman, John Barry, James Horner and Alan Silvestri to name a few and can be heard as well on the tracks to Glory, The Rocketeer, Field of Dreams, X-Men: The Last Stand, Spider-Man 3, Ice Age, Polar Express, Beowulf, Dances with Wolves, Toy Story, Cars, Apollo 13, Forrest Gump, Titanic, Pearl Harbor, Transformers, The Simpsons Movie, Night at the Museum, King Kong, Signs, Peter Pan, Hook, as well as Independence Day and the Star Trek films, among others. Most recently, Mr. Thatcher was deemed principal horn in James Newton Howard’s soundtrack of The Last Airbender directed by M. Night Shyamalan.

Thatcher has joined Kristy Morrell on the faculty of the USC Thornton School of Music as the co-professor of Horn. Notable students include J. Greg Miller.