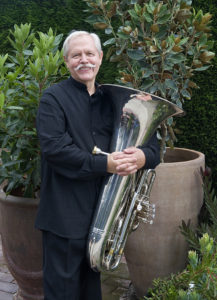 Jim Self is an award-winning Los Angeles based freelance and studio musician, a veteran of thousands of motion pictures, television shows and records, and tuba soloist on many prominent movies. His tuba was the “Voice of the Mothership” in Close Encounters of the Third Kind. For many years he was first tuba for John Williams, James Horner, James Newton Howard and John Debney, among others. Jim has recorded with hundreds of artists including Placid Domingo, Mel Torme, Frank Sinatra, Barbra Streisand and Don Ellis. He is principle Tuba/Cimbasso with the Pacific and Pasadena Symphonies, the Hollywood Bowl Orchestra and the Los Angeles Opera Orchestras.  Early in his career, Jim was in the US Army Band in Washington DC and a tuba professor at the University of Tennessee. Jim holds a DMA from USC’s Thornton School of Music where he is an adjunct professor of Tuba and Chamber Music. His compositions and arrangements include works for solo tuba, brass quintet, other brass, string and woodwind chamber music, wind band and orchestra. Jim has produced 14 solo jazz and classical recording projects that feature jazz greats like Gary Foster, Pete Christlieb, Francisco Torres, Ron Kalina and Warren Luening. Many feature his own unique instrument, the FLUBA (picture a tuba-sized Flugel Horn). Jim’s latest “Floating in Winter” is a duo tuba/guitar CD with the great John Chiodini. Jim’s music and recordings are available from: www.jimself.com