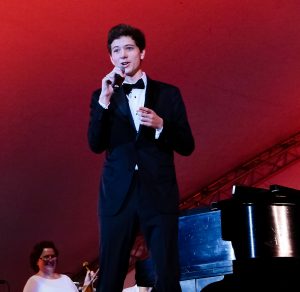 Finn Sagal was the winner of the 2017 Songbook Academy® and served this past year as the Songbook Youth Ambassador.  He is a recent graduate of La Cañada High School where he performed with the award-winning LCHS Chamber Singers under the direction of Dr. Jeff Brookey, as well as in various musicals, including “Into the Woods”, “The Sound of Music”, “Guys and Dolls”, and most recently performed Javert in “Les Miserables”. Finn also is an accomplished alto saxophone player and played principal alto saxophone and soloist in the Colburn School Wind Ensemble, and lead alto in his high school jazz band.

During the past year, Finn has had wonderful opportunities to perform and represent the Songbook Foundation across the country.  He made his official debut as Songbook Youth Ambassador at the Great American Songbook Hall of Fame Induction Gala honoring Ella Fitzgerald, Mitzi Gaynor, and Oscar-winning lyricist, Ray Gilbert. He performed The National Anthem at a NFL COLTS game in Indianapolis, he performed with Michael Feinstein at his clubs in San Francisco and NYC, and also at the Wynn Hotel in Las Vegas with Liza Minelli. He was most excited to perform this past Spring at Jazz at Lincoln Center in NYC. Finn would like to thank Michael Feinstein and the Great American Songbook Foundation for the amazing experience!

Finn is very much looking forward to attending UCLA’s Herb Alpert School of Music in the Fall, and majoring in Vocal Performance/Opera with Juliana Gondek.