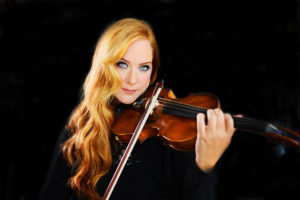 Elizabeth Hedman started playing the violin at the age of six, on an instrument given to her by her piano teacher, whose father had been a violin maker. Since that time, Ms. Hedman has soloed with numerous orchestras, including The Santa Barbara Symphony, The National Repertory Orchestra, The Cleveland Institute of Music Orchestra, The Northwest Chamber Orchestra and The Seattle Youth Symphony.

Her education includes Bachelor’s and Master’s Degrees from the Cleveland Institute of Music, where she won both the Concerto Competition and the Valedictory Award and was teaching assistant to Donald Weilerstein.

Currently, Elizabeth enjoys a diverse musical career.  She is Associate Concertmaster for the Santa Barbara Symphony as well as a member of the Santa Barbara Chamber Orchestra and the Pasadena Symphony and Pops. Elizabeth plays regularly with the Los Angeles Opera, Los Angeles Chamber Orchestra and the Los Angeles Master Chorale. She is a member of the newly formed Pasadena String Quartet. Since 2009 she has been performing at the renowned Oregon Bach Festival, where she has acted as Principal Second for select performances. She is currently on the violin faculty at The Pasadena Conservatory of Music and Pasadena City College.