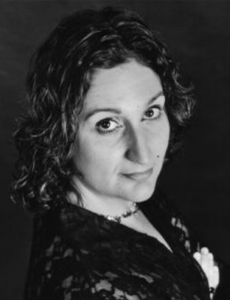 Described as “a remarkably mature young violinist with extraordinary stage presence”, “emerging as if a highly burnished and glowing ruby”, violinist Aroussiak Baltaian has gained an international attention through her extensive appearances as a prominent recitalist, soloist, chamber musician and recording artist.

Born in Plovdiv, Bulgaria, Aroussiak Baltaian began to play the violin at the age of five with her father Garo Baltaian, with whom she completed her education at the “Dobrin Petkov” Music School in Plovdiv. She received the Bachelor of Music Degree as an Outstanding Graduate from the University of Central Arkansas where she studied with Kevork Mardirossian.

Upon receiving a grant from The British Council, she continued studies at the Guildhall School for Music and Drama in London, England under the direction of Professor Yfrah Neaman where she was awarded the Concert Recital Diploma (Premier Prix). Ms. Baltaian received a Masters of Music Degree from the University of Southern California where she worked under the direction of Martin Chalifour.

Ms. Baltaian currently serves on the faculty of the Music Department at the Master’s College. She is also a member of the Pasadena Symphony Orchestra and performs regularly with the Los Angeles Philharmonic.