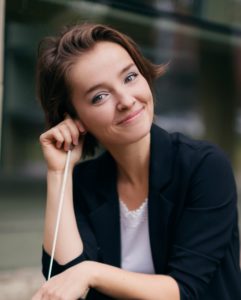 Anna Rakitina has been appointed assistant conductor of the Boston Symphony Orchestra and its Music Director Andris Nelsons beginning with the 2019-20 season for a two-year term and became only the second woman assistant conductor in the Boston Symphony’s history. In addition to her responsibilities in Boston, Anna Rakitina was named 2019-20 Dudamel Fellow with the Los Angeles Philharmonic. Under the supervision of the orchestra’s Music and Artistic Director, Gustavo Dudamel, she conducted Los Angeles Philharmonic youth concerts at Walt Disney Concert Hall and developed her craft through involvement in the LA Phil’s orchestral, education and community programs such as Youth Orchestra Los Angeles (YOLA).

In the 2020-21 season Anna Rakitina will make her subscription series debut with the Boston Symphony Orchestra and debut concerts with Baltimore Symphony orchestra, Orchestre de Chambre de Lausanne and Orchestre de Paris amongst others.

In 2019 Anna made her debut with Teatro del Maggio Musicale Fiorentino, the Sinfonieorchester Biel Solothurn in Switzerland, and the Jenaer Philharmonie in Germany. In 2018 she became a fellow in The National Philharmonic Orchestra of Russia. In 2017 she was a guest conductor in Taiwan National Orchestra.

Anna was born in Moscow. She began her musical education as a violin player then has studied conducting at Moscow Tchaikovsky Conservatory in the class of associate professor Stanislav Diachenko (assistant of Prof. Gennadiy Rozhdestvensky). From 2016 to 2018 she studied conducting in Hamburg Hochschule für Musik und Theater (Prof. Ulrich Windfuhr).

During her studies, Anna conducted the following stage performances: “Eugene Onegin” and “Iolanta” by Tchaikovsky, “Aleko” by Rachmaninov,

“The Rape of Lucretia” by Britten and others. Also, Anna wrote PhD thesis work about Rachmaninov.

In 2016 as a participant of Lucerne Academy she took part in the master-class by Alan Gilbert. The year later, 2017, she was Bernard Haitink’s apprentice in his master-class at Lucerne. Also, she participated in master-classes by Gennadiy Rozhdestvensky, Vladimir Jurowski, Johannes Schlaefli. In June 2018 she became a finalist of Workshop with Critical Orchestra in Berlin.

One of Anna’s main achievements is the creation of the chamber orchestra “Affrettando” in conjunction with another conductor Sergey Akimov.

The orchestra became already famous in Moscow as a group of highly professional musicians, which always performs interesting programs.