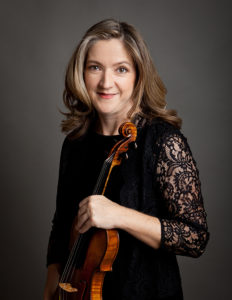 Ms. Hershberger has performed extensively as a soloist and in chamber music performances throughout the country. In addition to her post as Associate Concertmaster of the Pasadena Symphony, she was the Concertmaster of the Santa Barbara Chamber Orchestra and has served as a guest concertmaster for the Pasadena Symphony and Pasadena Pops Orchestra, Fresno and Burbank Philharmonics, among others. A native of Syracuse, NY, she has appeared multiple times as a soloist with the Syracuse Symphony Orchestra, as well as with the Santa Barbara Chamber Orchestra, the California State University of Los Angeles Orchestra, the Round Top Festival Orchestra and the University of Houston Orchestra.

Frequent recital appearances include performances on Sunday’s Live at LACMA, at the Redlands Bowl Summer Festival and the Azusa Pacific University Artist Series. A performer in chamber music festivals throughout the United States, she has participated in Pasadena’s Schubertiade, the High Desert Chamber Music Series, the Sierra Chamber Society, Mozart Festival in San Diego, Twentieth Century Unlimited Festival in Santa Fe La Jolla Summerfest and the Utah Music Festival. As a former faculty member of the Colburn School, her students have gone on to study at USC, Colburn, Juilliard and Curtis Schools of Music, and on to professional careers.

Previously, she was a full scholarship student of Robert Lipsett at the University of Southern California as a recipient of the Heifetz Award, and a student of Dorothy Delay at Juilliard Pre-College. In addition to her performing career, she has played on over 600 major motion picture soundtracks.

Ms. Hershberger resides in Pasadena, C.A., with her husband and three children.