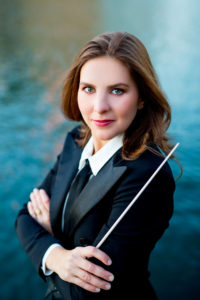 Russian-American conductor Lidiya Yankovskaya is a fiercely committed advocate for Russian masterpieces, operatic rarities, and contemporary works on the leading edge of classical music. She has conducted more than 40 world premieres, including 16 operas, and her strength as an innovative and multi-faceted collaborator has brought together the worlds of puppetry, robotics, circus arts, symphonic repertoire, and opera onstage. As Music Director of Chicago Opera Theater, Ms. Yankovskaya has led the Chicago premieres of Jake Heggie’s Moby-Dick, Rachmaninov’s Aleko, Joby Talbot’s Everest, Tchaikovsky’s Iolanta, and the world premiere of Dan Shore’s Freedom Ride.

In the 2021/22 season, Ms. Yankovskaya makes a trio of Texan debuts, leading performances of Carmen at Houston Grand Opera, a tribute to Ruth Bader Ginsburg at Dallas Symphony Orchestra, and a concert of Gershwin and Dawson at Fort Worth Symphony. Elsewhere, she makes her Minnesota Opera debut with Voices United and leads a program of Brahms and Wagner at Elgin Symphony. At Chicago Opera Theater, she’ll conduct the Chicago premiere of Mark Adamo’s Becoming Santa Claus and a concert version of Carmen, starring Jamie Barton opposite Stephanie Blythe.

Ms. Yankovskaya is Founder and Artistic Director of the Refugee Orchestra Project, which proclaims the cultural and societal relevance of refugees through music, and has brought that message to hundreds of thousands of listeners around the world. In addition to a National Sawdust residency in Brooklyn, ROP has performed in London, Boston, Washington, D.C., and the United Nations. She has also served as Artistic Director of the Boston New Music Festival and Juventas New Music Ensemble, which was the recipient of multiple NEA grants and National Opera Association Awards under her leadership.

As Music Director of Harvard’s Lowell House Opera, Ms. Yankovskaya conducted sold-out performances of repertoire rarely heard in Boston, including Tchaikovsky’s The Queen of Spades, Britten’s A Midsummer Night’s Dream, and the U.S. Russian-language premiere of Rimsky-Korsakov’s The Snow Maiden. Her commitment to exploring the breadth of symphonic and operatic repertoire has also been demonstrated in performances of Rachmaninoff’s Aleko and the American premieres of Donizetti’s Pia de’ Tolomei, Rubinshteyn’s The Demon, and Rimsky-Korsakov’s Kashchej The Immortal and Symphony No. 1.

An alumna of the Dallas Opera’s Hart Institute for Women Conductors and the Taki Alsop Conducting Fellowship, Ms. Yankovskaya has also served as assistant conductor to Lorin Maazel, chorus master of Boston Symphony Orchestra, and conductor of Boston Youth Symphony Orchestra. She has been featured in the League of American Orchestras Bruno Walter National Conductor Preview and Cabrillo Festival for Contemporary Music, and assisted Vladimir Jurowski via a London Philharmonic fellowship.

Ms. Yankovskaya holds a B.A. in Music and Philosophy from Vassar College, with a focus on piano, voice, and conducting, and earned an M.M. in Conducting from Boston University. Her conducting teachers and mentors have included Lorin Maazel, Marin Alsop, Kenneth Kiesler, and Ann Howard Jones.

Ms. Yankovskaya’s belief in the importance of mentorship has fueled the establishment of Chicago Opera Theater’s Vanguard Initiative, an investment in new opera that includes a two-year residency for emerging opera composers. Committed to developing the next generation of artistic leaders, she also volunteers with Turn The Spotlight, a foundation dedicated to identifying, nurturing, and empowering leaders – and in turn, to illuminating the path to a more equitable future in the arts.

Recipient of Solti Foundation U.S. Career Assistance Awards in 2018 and 2021, Ms. Yankovskaya has been a featured speaker at the League of American Orchestras and Opera America conferences, and served as U.S. Representative to the 2018 World Opera Forum in Madrid.