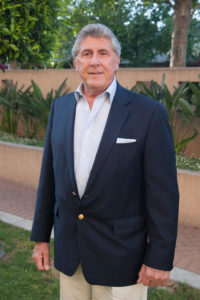 Robert attended California State University of Los Angeles, University of Arizona, and graduated from UCLA. Early in his career, Robert was Vice-President General Manager-Wine Division of Young’s Market Company in Los Angeles. In 1983, he discovered a desire to have his own business and created Contemporary Marketing Ltd.—a sales, marketing, and vintner company specializing in the Wine and Spirits Industry.

Robert currently sits on the Board of Directors of the Pasadena Symphony Association and for the last ten years has held the position of Vice-President of Finance & Treasurer. Robert has also been the Wine Chair of the Huntington Hospital-Parkway Grill “Fall Food and Wine Festival” for the past 36 years. Bob is a lifelong resident of Pasadena, residing there with his wife of 22 years, Kim, and their daughter, Darcy.